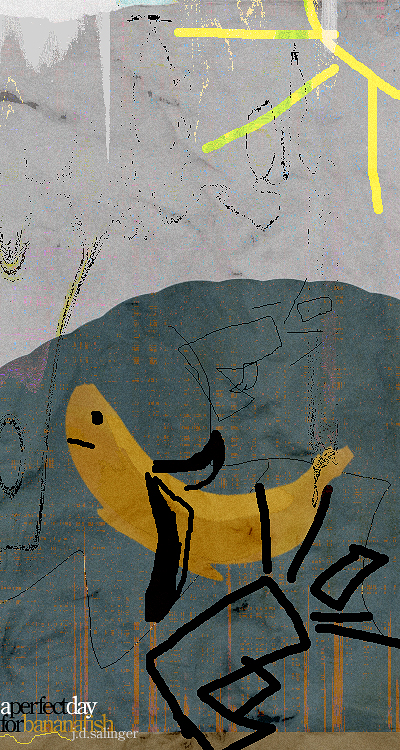 A young, newlywed soldier who has just returned from the war.  He’s on vacation with his wife in Florida.

A four-year-old little girl who interacts with Seymour on the beach.  She and her mother are staying in the same hotel as Seymour and Muriel.

Another little girl who is staying in the same hotel.

The story opens on Muriel alone in she and Seymour’s hotel room.  Her call finally gets connected, and she proceeds to have a long conversation with her mother, who expresses a great deal of concern about Muriel because she seems to think that Seymour is crazy.

The scene changes.  Sybil is on the beach, having suntan lotion applied by her mother.  Her mother leaves to go back up to the hotel to have a drink

Sybil walks down the beach and approaches a man (Seymour) who is lying in his robe on the beach.  He and Sybil have a characteristically Salingeresque conversation wherein Seymour tells Sybil to keep an eye out for bananafish.  He exaplains that bananafish “lead a very tragic life” in that they swim into a hole underwater and gorge themselves on bananas so much that they can’t get out and die.

After he and Sybil’s time in the water Seymour goes back into the hotel.  He has a strange outburst at fellow hotel guests in the elevator, goes back into his hotel room, looks at his wife, retrieves his gun from his luggage, sits on the bed, and shoots himself in the head.

for an overview of each critical article, click on the link to each, or visit our Bibliographical Journal Article section.

Allsop, Kenneth:  The Dissentient Mood  “The Angry Decade:  A Survey of the Cultural Revolt of the Nineteen-Fifties

Boe, AF:  For Seymour:  With Love and Judgement”  Wisconsin Studies in Contemporary Literature, 1963

O’Hearn, S:  “The development of Seymour Glass as a figure of hope in the fiction of JD Salinger”  Open Dissertations and Theses, 1982

As you will learn if you browse the critical articles listed above, there are a myriad of things that Salinger scholars like to discuss when talking about “A Perfect Day for Bananafish.”  Here is a list of critical questions that the articles above will help you answer.

1.  Why do you think Seymour kills himself at the end of the story?

2.  Why did the author choose that fate for Seymour?

3.  How do you explain Salinger’s need to revisit the topic of Seymour so often in his later work?  Do you think he regretted killing Seymour off in “A Perfect Day for Bananafish?”

4.  What do you think of the way that shell shock/war trauma is characterized in the story?  Do you think that Muriel is sympathetic to Seymour’s mental condition?

5.  What is the significance of Sybil?  Why do you think Seymour relates to Sybil better than to others?

6.  What is the significance of feet in this story?  Why does Seymour kiss the bottom of Sybil’s foot, and why does Seymour accuse the lady in the elevator  of looking at his feet?

7.  Why does Seymour want Sybil to look for Bananafish in the first place, and what is a Bananafish?