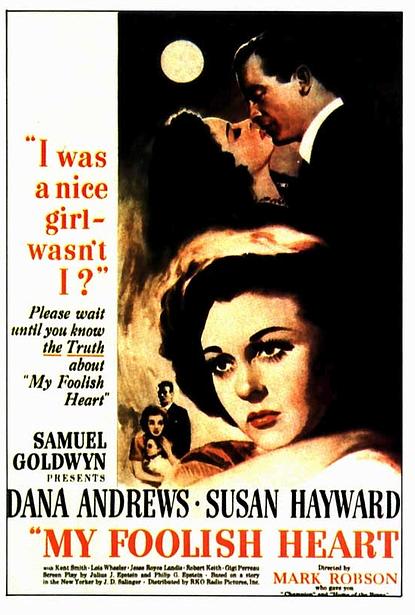 “As Peter Beidler, among others, has noted, ‘Most of Holden Caulfield’s references to book and movies in The Catcher in the Rye turn out to be real, though perhaps obscure ones.’ (44).  One such obscure but real reference-perhaps two, although the reference, or references, might be Salinger’s rather than Holden’s-is to My Foolish Heart, a 1949 feature film based on Salinger’s sotry ‘Uncle Wiggily in Connecticut’ (1948, reprinted in Nine Stories, 1953) and remembered now mostly for its title song, which became a pop standard, and for having ‘killed Salinger movies’ as John Truby phrases it.  The creative team at Metro-Goldwyn-Mayer studios-which included Samuel Goldwyn and Casablanca screenwriters Julius and Philip Epstein-managed to turn Salinger’s brief but bitter indictment of upper-middle-class phoniness into what one reviewer called a ‘four-handkerchief tearjerker of repentance and redemption’ (qtd in Alexander 141).  Salinger, reportedly both humiliated and appaled by what ‘Hollywood had done to ‘Uncle Wiggily,’ subsequently refused, notoriously, to sell the movie rights to Catcher in the Rye.  ‘No, no, no,’ he insisted, ‘I had a bad experience in Hollywood once’ (Alexander 141-142).”