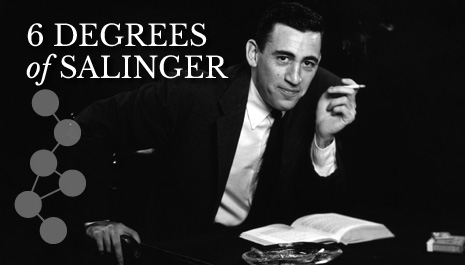 As two of the most influential and well-known authors of the 20th century it is not surprising that F. Scott Fitzgerald and Ernest Hemingway would inspire a great many young writers. The surprise is that one of those young writers would go on to achieve a comparable level of importance to his predecessors in the literary world. Fitzgerald and Hemingway both influenced Jerome David Salinger but in very different ways.

Although J.D. Salinger never met F. Scott Fitzgerald he was still greatly inspired by Fitzgerald through his work.  In his biography of Salinger In Search of J.D. Salinger, Ian Hamilton states that “the authors he most admired were Sherwood Anderson, Ring Lardner, Scott Fitzgerald: These three had almost classic status in his mind. (53). As he developed as a writer Salinger came to see himself as following in Fitzgerald’s footsteps and perhaps even achieving what Fitzgerald could not. As Hamilton reports:

In 1941 Salinger would have liked to think he was doing what Scott Fitzgerald had to do. Fitzgerald had died a year earlier, and his legendary aspects were fresh in everybody’s mind. Salinger, in his letters, always spoke warmly of him and took heart from the knowledge that it was the Saturday Evening Post that had supported the writing of the Great Gatsby. In later years he would denounce Fitzgerald’s association with the magazine. For the moment though, he believed that he—Fitzgerald’s successor—could perform a balancing act, which the master himself could never master: between the Nathan and the Woodford worlds, between integrity and commerce (64)

Aside from Fitzgerald’s overall influence on Salinger’s vision for the direction his career would take; there is also evidence that Fitzgerald’s writing directly inspired Salinger’s own works. One prominent example of this is the end of “A Perfect Day for Bananafish” which bares a striking resemblance to the end of Fitzgerald’s novelette “May Day,” published in 1920. In his hotel room Fitzgerald’s main character Gordon Sterrett took the revolver he bought at a sporting goods store and fired a shot into his own head “just behind the temple” (Fitzgerald 141). Salinger’s main character, Seymour Glass also committed suicide in a hotel room.